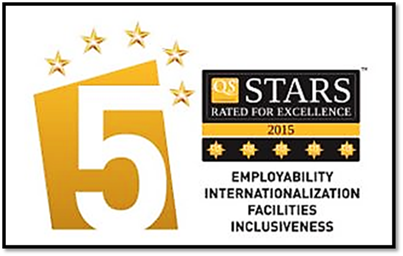 At the 11th QS-APPLE 2015 Conference and Exhibition in Melbourne (Australia), Taylor's University received its QS Stars. Unlike the more widely-known QS Rankings, the QS-Stars are a rating system. The QS Stars audit evaluates an institution against different indicators, and awards universities between one and five stars over ten categories, as well as providing an overall rating. Fifty indicators are grouped into ten categories that are used to assess a university, and they include; Research, Teaching, Internationalisation, Facilities, On–Line/Distance Learning, Innovation, Arts and Culture, as well as Inclusiveness and an additional nominated specialist criteria of expertise. Taylor's University was recognised in the QS 2015 rankings as being ranked in the QS Asia Top 250. While fewer institutions has gone forward to obtain their QS-Stars, they are able to provide prospective students with more useful information. As Emeritus Professor Dato’ Dr. Hassan Said, the VC of Taylor's University commented, "QS Stars is a rating system which allows students to get a wider picture of an institution’s qualities, looking at everything from the employability of graduates, to facilities and community engagement. It is designed to reflect the nuanced mission of universities, and the needs of students who may be interested in things other than those to which traditional rankings are necessarily limited". Taylor’s University was awarded a 5-Star rating in four categories namely, employability, facilities, internationalisation and inclusiveness and an overall rating of 3-Stars. The QS Stars team was led by Professor Dr. Mushtak, Dean of the School of Engineering, and supported by Dr. Thian Lok Boon from Quality Advancement Department (QAD). 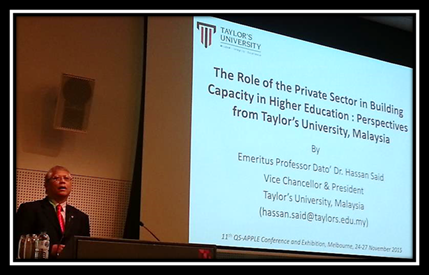