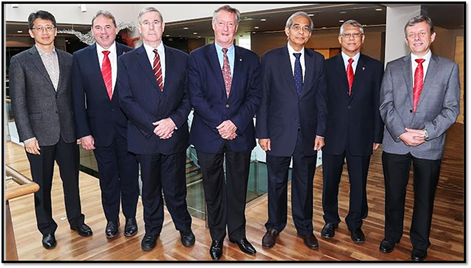 Given the strong international focus of Taylor's University, the university has an International Advisory Council (IAC) which draws on the expertise of a number of pre-eminient leaders in education. Those attending the 2015 IAC meeting included Sir Graeme Davis (the former Vice-Chancellor of the University of London, and the current President of the British University of Vietnam), Mr. David Jones (General Manager, RUAG Aviation Malaysia and former Chairman of the European Union - Malaysia Chamber of Commerce), Professor Steve West (Vice-Chancellor of the University of the West of England) and also Sir John Daniel (President of United World Colleges). Last year the Governor-General of Canada named Sir John Daniel as an Officer of the Order of Canada in the 2014 New Year's List. Sir John received this prestigious award for his “advancement of open learning and distance education in Canada and around the world”. This year, the annual meeting considered a wide-range of issues relating to the continued internationalisation of the university given the launch of our Global Strategic Plan. The IAC was established in 2012 , and as Emeritus Professor Dato' Dr. Hassan said  "As part of the University's key thrusts, it is imperative for us to propel the institution to being the top-level university with a global viewpoint via international academic partnership, student and staff exchange opportunities, industry networking and research collaborations. We are proud to have so many renowned academic and industry professionals as our IAC members. Their trust and confidence in Taylor's University is a great testimonial of our institutional strengths and what we can further achieve in the future". To find out more about Taylor's University Global Strategic Plan & Framework click here.