Advertising, a Platform to Change Society

ARMED with at least 30 years of experience in advertising, Alvin Teoh uses it as a platform to spread social awareness on various issues.

Some of his most crucial work includes a video called, “Nursery Crimes: Itsy-Bitsy Fingers” - a project aimed at spreading awareness on the issue of child sexual exploitation.

Speaking to a crowd of over 100 students at IACT College, Petaling Jaya for the grand finale of the #MySekolah short film competition, the executive creative director of Naga DDB says it is important to use advertising as a platform to change society.

“It gives you a platform to reach out to people. It gives you the tools and understanding of how to influence people,” he shares.

The #MySekolah competition is a collaborative effort between IACT and Study Hub Asia for Forms Four and Five students across the country.

Entering its second year, the varsity received over 130 entries, of which only 14 short films were shortlisted for the final.

The varsity held a video production clinic for #MySekolah participants, and trained them on ideation, creative execution and basic filmmaking techniques.

Impressed by the youngsters, Teoh said an important aspect of a career in the arts and storytelling is an interest in life and the ability to digest what goes on in one’s environment.

“The world is our classroom and we are always students,” he adds.

“Every student who presented has talent that can be cultivated,” he adds.

Chan says the varsity held the #MySekolah competition to give students the opportunity to develop their talent.

“The quality of entries has improved! Anyone with a mobile device can shoot a video but the challenge lies in the editing it and in the quality of the story, among others,” he says.

Surprised at being crowned champions of the #MySekolah short film competition, Mohammad Aliff Mohammad Noor, 17, says he learnt how to edit videos through YouTube and by participating in various forums.

“My teammates and I share the same interest,” adds the St John’s Institution student who dreams of making travel videos.

Mohammad Aliff and his team walked away with scholarships worth RM120,000 and RM1,000 for the school.

Chung Hua Middle School No. 1, Sarawak, came in second, clinching scholarships worth RM72,000 and RM700 for the school.

Foo Zhi Yung, 18, says he and his teammates are happy with the result as the other
school teams were tough competitors. 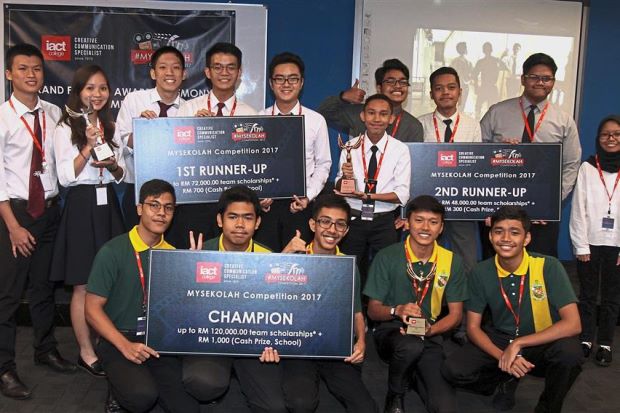 Photo caption: The winners of the short film competition pose with their mock cheques.