Germany’s education system is mainly controlled by the states (Länder) and the federal government plays only a minor role. Most of Germany’s universities are public institutions and federally funded. In 2006, however, the ban on tuition and fees for higher education was lifted, allowing universities to charge students tuition fees. The public reaction to this, however, was overwhelmingly negative. This 8-year policy experiment triggered nation-wide protests and demands for change from the everyone, including the students and law-makers. 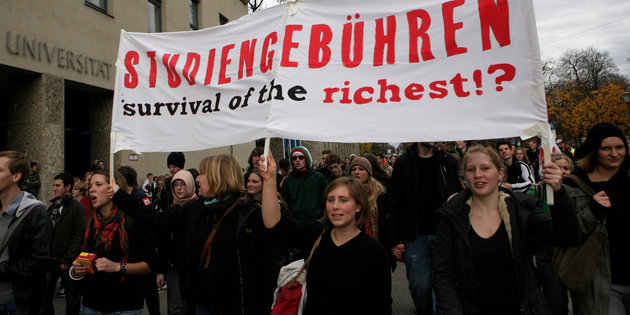 The strong campaign for free education produced strong results. This week marked the last German state’s abolishment of tuition fees, completing Germany’s transition back to nation-wide free education from the 2014-2015 academic year. This extension of tuition-free education follows suit of many Scandinavian and European nations who believe that the gift of knowledge should be available to all. In fact, German Senator, Dorothee Stapelfeldt, was quoted saying, “Tuition fees are socially unjust”. She is of the belief that “they particularly discourage young people who do not have a traditional academic family background from taking up studies.” The German education system has the concept of nurturing its citizens “to ensure that young women and men can study with a high quality standard free of charge in Germany.”

The quality of education in Germany is excellent, with some of the oldest and most highly regarded universities in the world. There are 13 German universities in the Top 200 2014 World University Rankings by QS and 31 in the Top 400. Topping the list is Heidelberg University, at 49. Established in 1386, is one of the oldest and most reputed universities in Europe; it has produced 56 Nobel laureates and countless . Another reputable and highly ranked German . According to UNESCO, Germany hosts almost 207,000 international students. These inbound students to Germany come from a variety of countries, like, China, Turkey, Russia, Austria, India, and Korea.

Statistics from 2013 state that 24% of a total of 2.5 million tertiary students, or 666,000 students, received state subsidies. Students in Germany will also be offered significantly more benefits and subsidies. Starting from the 2016-2017 academic year, substantial changes will be implemented by the federal Education Ministry. The monthly ceiling on the Bafög, a support package for students that consists of a 50% grant and a 50% loan, will be increased from €670 to €735. Subsidy policies for non-European Union nationals and asylum seekers have also been changed. They are eligible to claim subsidies on family or humanitarian grounds after only 15 months of residence, rather than after 4 years, as it was previously. The federal education minister, Johanna Wanka, explained that Germany wants “to set an example with these changes and show people with knowledge and experience that they are welcome in Germany.”

There are, of course, still some barriers to entry when it comes to studying in Germany. While there are subsidies and scholarships available, you should not forgot the basic costs of living abroad, like flights, housing, food, books and supplies, transport, etc. The application process for universities differs from most other countries, so that is another set of deadlines and documents that you will need to consider beyond the usual credentials and records. For example, all classes are in German, so conversational fluency in German is a prerequisite. This may seem like a basic requirement, but it is quite a difficult language to learn. Beyond these requirements, you should keep in mind that the selection process itself is competitive because applicants aren’t filtered by their ability to afford expensive degrees and are solely merit-based. This larger pool of potentially smarter applicants also keeps Germany’s universities competitive and helps maintain the standard of education.

This does set an interesting and inspiring example for other nations to follow. Most Germans view education as a necessary human right. The 8-year experiment of tuition fees left everyone from students to policy-makers dissatisfied. Developed nations in particular should consider a similar program or policy change. Germany is more similar to other developed nations, like the UK or US, compared to Scandinavian countries. Which brings about the question, if Germany can implement this system, why can’t other countries? Offering tuition-free education, or even highly subsidized education opens up the education system to the best minds, globally. This increases, not decreases, the quality of education because if anyone can apply and afford education, it is truly a meritocracy. This progressive move equalizes and contributes to the growth of society, and is also something developing countries should consider to lower inequality and speed up development.