UTP Researcher is one of the Best in the Country 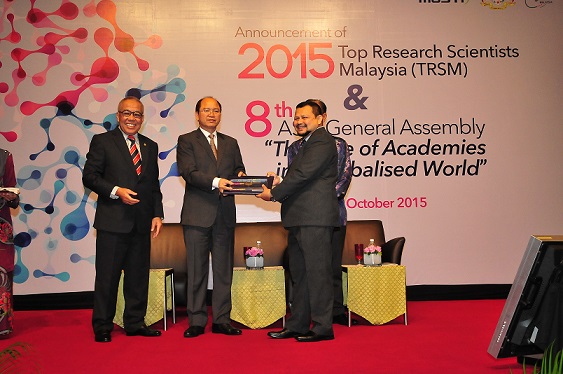 Universiti Teknologi PETRONAS (UTP) researcher Professor Dr Azmi Mohd Shariff has added to the illustrious history of the university with his recent recognition as one of the Top Research Scientists of Malaysia (TRSM).

Azmi joins the ranks of this prestigious group of scientists who form the database of the best brains in Malaysia.

Initiated by the Academy of Sciences Malaysia (ASM) in 2010, TRSM identifies and recognises leading research scientists in the country who actively generate new knowledge, introduce new discoveries and whose work has the potential to contribute to the socio economic transformation of the nation.

TRSM members are specially selected as role models of excellence and mentors to the next generation.

As a hub for the generation of knowledge and dissemination to spur the growth of science, technology and information in Malaysia, its pool of leading researchers come from all areas, including fundamental and applied sciences, social science and industry research experts.

To date, 110 researchers and scientists are part of this TRSM database, 99 of whom are from public universities, five from private universities and six from research institutes.

Azmi has the privilege and prestige of being the first research scientist from UTP to be given this honour. He was among the 14 who were recognised by the ASM this year.

Azmi’s predilection and passion for research and innovation was nurtured during his undergraduate years when he was part of the pioneer batch of the Chemical Engineering degree programme at Universiti Teknologi Malaysia.

As fate would have it, he secured a position as a research officer upon graduation and was plunged into a highly competitive and challenging environment.

Today, with a wealth of knowledge in two fields - process safety and carbon dioxide separation processes - he is a highly valued academician and researcher who has contributed much to the education sector and industry as well.

His work in education encompasses not only the students he teaches at UTP today, but also people within industry as well.

As for his research contribution, he works closely with industry supported by his great desire to contribute positively to progress and growth.

“In research, it is necessary to identify the areas that are lacking. This is where we can contribute most and make an impact,” he said. “My two areas of specialisation are very different, yet they are somewhat complimentary, and this makes it highly advantageous.”

Working closely with industry has given him the added insight and advantage of knowing where research and innovation are needed.

This is what fuels his passion and drive because to Azmi, research is best when it can be translated into practical and beneficial applications for industry and therefore for society at large.

Deeply involved in both research activities as well as in academia, the list of his accomplishments is indeed long and his successes are to be lauded. Azmi has mentored more than 20 MSc and PhD students and has more than 150 publications in indexed journals.

With more than 20 patents and copyrights filed, he has led more than 25 research projects with total cumulative grants of more than RM35 million.

Azmi is the head of both the Carbon Dioxide Capture Research and Advanced Process Safety research centres of UTP and is deep into various research projects with a special focus on the oil and gas industry.

He is currently working on two major projects in carbon dioxide management as well as in process and design safety for industry.

“The TRSM recognition is truly an honour, and I am humbled that my work and contribution have been considered significant enough to meet the high expectations and standards of ASM.

It is my hope that this will spur on more researchers and scientists, especially from UTP, to continue striving hard in their various fields and specialties so that together we can contribute to the development and progress of Malaysia under this group,” he said.