ALFA is not a music college — just in case the audience at Ode Art Cafe last night had that assumption after listening to the mesmerizing serenades brought to you by ALFA Music Club, in collaboration with the newly-opened cafe nearby the campus. The talented students who sang and played instruments during the acoustic session came from Architecture, Interior Architecture, Visual Communication and Early Childhood Education programs! 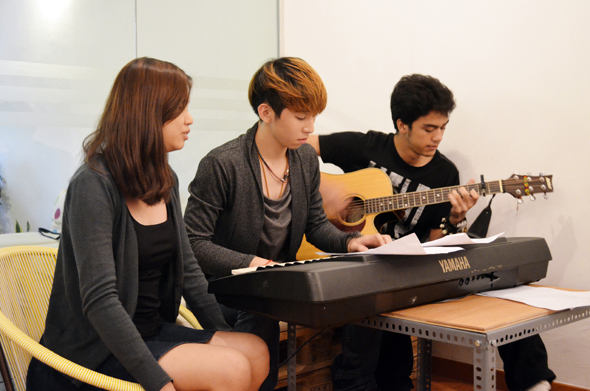 The first performers were Suzanne from Early Childhood Education course, and Wee and Nazri from Architecture course.

Looking back at the success of ALFA’s Got Talent earlier this month, there’s no surprise that Songbird Open Mic session would fly as well. Music is a form of self expression for the very talented music lovers at ALFA Music Club so when they had a platform to be heard by the public, you bet they would hold tight to the chance. So many of their college buddies turned up to give their support! 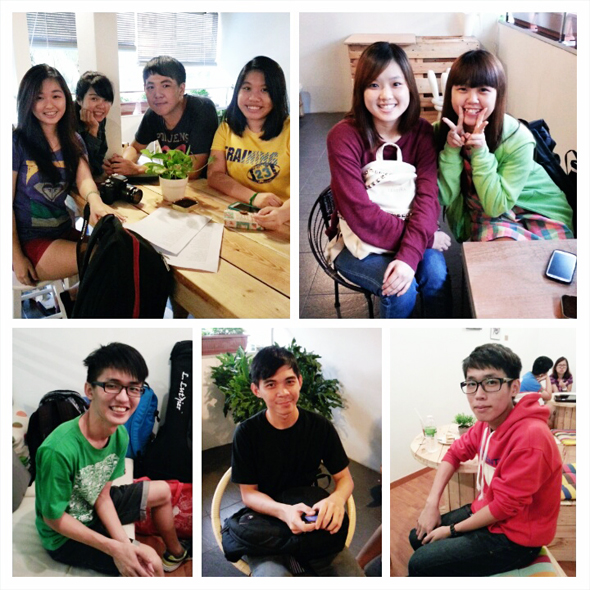 Check out the early birds who can’t wait to support ALFA talents! 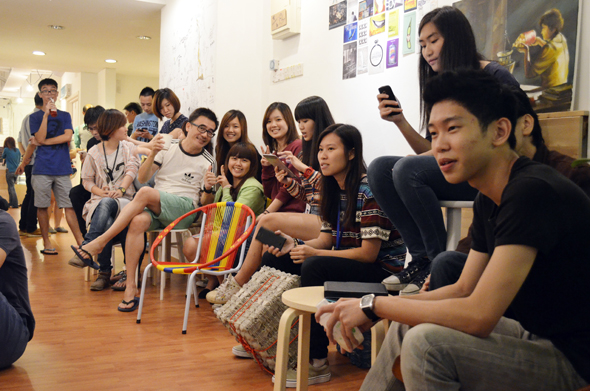 Hanging around the cafe with a cuppa and good music = thumbs up.

For almost 2 hours, the art cafe was transformed into a hangout place for music lovers. There’s no stage. There’s no spotlight. Only a common love for music for the performers on the couch, and the audience sitting and standing around the cozy space. And that was sufficient. As the performers sang and casually jammed their instruments, audience participated too — some sang along with the chorus, some added acoustic rhythm to the performance, and some harmonized to the songs. 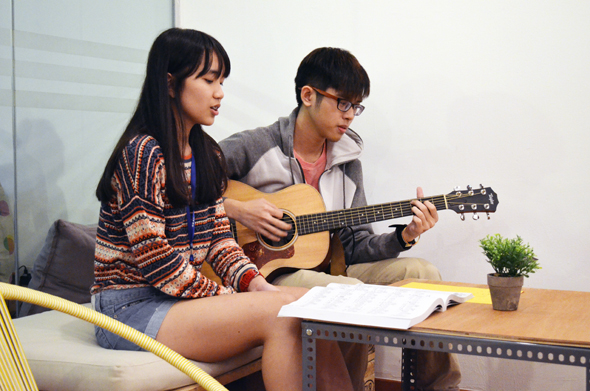 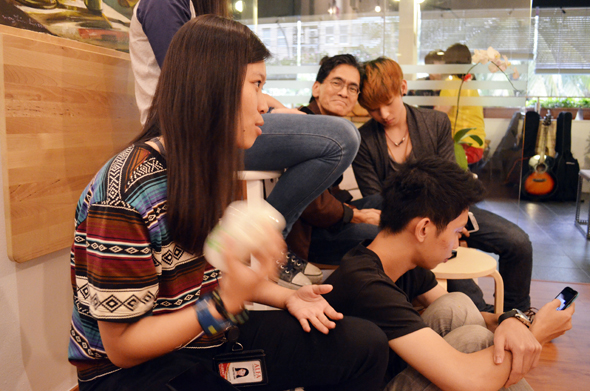 Wanna sing along and jam along? No problem! 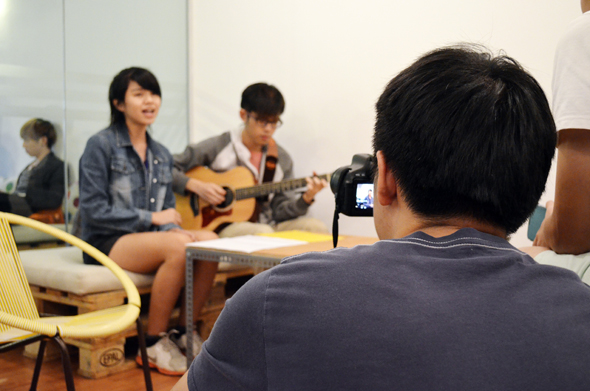 Can’t help but to record the good music. 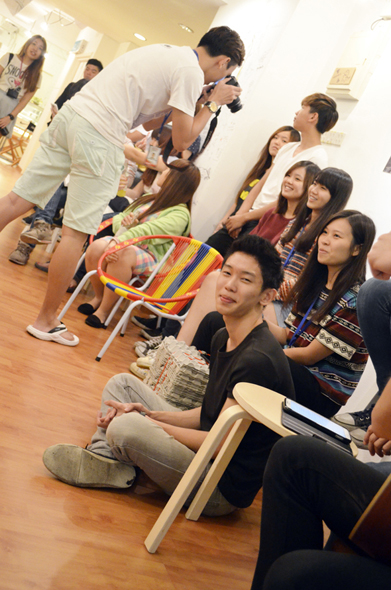 Noah, the emcee for the night chilling by the side when he’s not the center of attention. 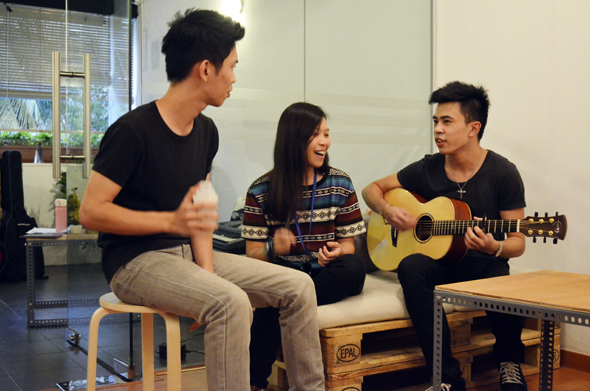 Noah, Yu Jin and Seneca ended the first set on a light note with Kantoi by Zee Avi.

Songbird Open Mic session at Ode Art Cafe was an important milestone for ALFA Music Club because this was their debut public performance. Even so, they were very comfortable with the music sharing session — passion for music was their biggest confidence boost! This is definitely not their last! Special thanks to Ode Art Cafe for lending the space to the students to showcase their talents. 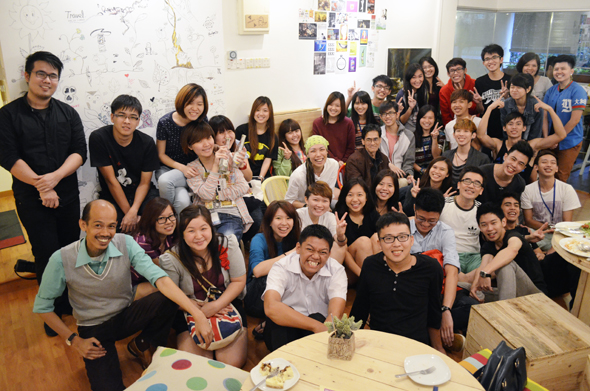 Can you feel the love (and joy) tonight?

Lastly, kudos to all the performers, especially the superstar of the night: Mr. Roger! He may sing songs released decades before the other performers were born. He may be 2 generations older than the audience. But his music captivated the crowd and his wisdom led the music club to thrive. 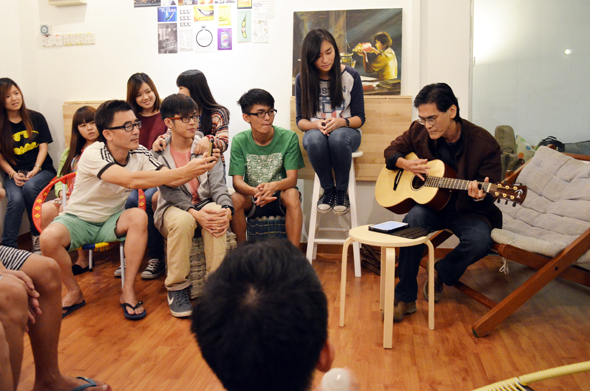 Mr. Roger drawing everyone’s attention to his voice and guitar.